A friend of mine and I discuss these two shows from time to time. I'm of the firm opinion that Grimm is the better show. But a lot of people like Once Upon a Time. And while there's a lot to like, there's also a lot to hate. Here are my reasons.

Concept:
The concept behind OUAT is a favorite of mine--re-told fairy tales. But in this iteration, the fairy tale characters reenact their most poignant internal conflicts in the real world, intercut with scenes of them in the fairy tale world (the Enchanted Forest, Oz, Wonderland, etc.). The structure is pretty great and a lot like Lost, which was created by the same duo.

Grimm does not follow specific fairy-tale plotlines. Instead, it transposes mythological and legendary beasts into modern-day Portland as part of a hidden underground world of wesen, human-presenting creatures who possess qualities like superhuman strength, enhanced speed, animal urges, and (at times) paranormal qualities such as breathing fire or seducing with a song. These wesen are policed by Nick Burkhardt, who is a Grimm, a human possessed with the ability to see wesen and derived from a lineage of wesen-assassins (and also, coincidentally, part of the actual Portland police). The show is structured like a police procedural which is pretty exciting and usually works, although the rate at which Nick and his partner Hank are racking up the inexplicably solved crimes has to be registering in the department soon. Even if the chief of police is on their side, they close a LOT of cases with, basically, "yeah, we got the guy. Can't tell you how, though."

Characters:
OUAT certainly has the stronger female characters. It is populated with vibrant, powerful, agentive women who run the gamut from nurturing earth-mother types to brassy ball-busters (and a lot in between). Some believe in love; others fear it. Some crave power; others embrace it.

Grimm's female characters, on the other hand, usually function as victims or villains. Often they are victims of gruesome and violent crimes that Nick and Hank solve. Rosalee is starting to become pretty heroic in her own right, and her knowledge of herbs has certainly saved the day more than once. Juliette, while she started out as a victim who Nick was keeping in the dark, has started to show some agency of her own. She turned Nick down when he proposed, saying that she wouldn't commit until he started being honest with her. Now that she's in on his secret identity, she helps him out from time to time, mostly with advice, internet searches, and a listening ear. And of course there's still Nick's mom, the unknown quantity, who is definitely an ass-kicker (but whose side is she on?).

My favorite woman on Grimm is certainly Adalind, the former Hexenbiest (sort of like a witch, but her true form is a lot uglier) turned normal, turned back into Hexenbiest during her pregnancy with the uber-Hexenbiest. While she certainly has been a villain up to now (and sometimes a victim--what was with that weird tongue-bitey scene with Nick in first season?), her status as the mother of Renard's (?) child may land her on the good-guy side. No matter what side she's on, though, she's a joy to watch on screen. Her turns from bitchy to saccharine to hair-pulling frustration are completely believable.

Dialogue:
You'll notice I didn't go into detail above about my favorite female characters on OUAT. It is so hard for me to separate a character from the dialogue they're given to speak. I really like Regina, but she has some of the show's worst lines. For instance, from this past week's episode: "Never bring your heart to a witchfight." Ughhhh--my eyes are rolling back in my head and I'm gagging from how gross that line is.

The show also depends heavily on clunky old chestnuts like "Love conquers all" and "magic always comes with a price." This season it's been the idea of "evil vs. wicked," since the new villain is the Wicked Witch of the West. They hammer that in at least twice an episode. This week we were cursed (ha ha) with the following exchange, from the Evil Queen and the Wicked Witch, respectively:

Regina: "This isn't the Wild West."
Zelena: "No dearie, it's the Wicked West."

The writers also depend heavily on puns and references to Disney movies. As Adam Grosswirth notes, this all adds up to some really campy dialogue. I have no problem with camp--after all, Buffy is one of my favorite shows ever--but something about the delivery in this show seems off to me.

I much prefer the less heavy-handed writing and delivery of Grimm. There are no oft-repeated cliches here, even though the characters might bear reminding that magic has a price. Monroe, Nick's best friend/go-to wesen, delivers some very cheesy lines for a vegan werewolf. But even those are played off as part of his character--Monroe is very sincere and has a sense of humor that would look good on any middle-aged dad. And the delivery, generally, is subtler and more offhand, even in the moments where shit. goes. down. For instance, OUAT probably averages one St. Crispin's Day speech (y'know, the speech where the charismatic leader inspires their rag-tag group of friends, reminding that they are fighting for something amazing and that bravery is what counts, ad infinitum) every four or five episodes. I can't think of any in Grimm.

Which is cool by me, because (and maybe this is because I just don't get into enough skirmishes with evil warlocks) I have never personally heard a St. Crispin's Day speech in real life.

Plot and Storytelling:
The final bone I have to pick with OUAT is its lazy storytelling. I really appreciate some of the interesting plot developments that the writers have come up with; they've managed to connect several canonical fantasy worlds (LOTR next, right guys?) and have all the characters link up. Rumplestiltskin is a sort of lynchpin for all of this: he is Peter Pan's son, and "the Dark One," a sort of general villain for many stories, and the Beast to Belle's Beauty, etc. His old lover Cora is the mother of the Evil Queen, the miller's daughter who Rumplestiltskin teaches to spin gold out of straw, and the Queen of Hearts in Wonderland. And the connections go on.

But the conflicts themselves are generally resolved by some sort of deus ex machina magical implement that has not been referenced in the story yet. Characters just happen to remember the existence of this [knife/root/potion/parchment/box/cauldron] at the right moment to dispel the crisis and then, half of the time, it is never mentioned again.

Grimm on the other hand does a pretty good job of setting up major plot points well in advance. Nick's magic key, the golden coins, Adalind's crazy-magic baby? All set up several episodes (or even seasons) in advance. It probably helps that Nick has an inherited stockpile of books and weapons, each of which has helped out in specific situations, and that Rosalee runs an herb shop specifically tailored to help out with spells and magical ailments. The closest we get to deus ex machina is when Nick mentions some new kind of wesen he has encountered, and MonRosalee look at each other like "Oh, shit," and reveal that they've heard of that specific breed since childhood but thought it was a story, like the wesen version of the Easter Bunny.

The ultimate point is, I watch both shows with great enjoyment. And even though I love to trash certain aspects of OUAT, it's also contributed to honing my taste as I think about why, exactly, it drives me crazy.

Email ThisBlogThis!Share to TwitterShare to FacebookShare to Pinterest
Labels: fairy tale, fantasy, Grimm, Once Upon a Time, television

So I was listening to Radio Lab recently, and Jad and Robert were learning about butterflies. Specifically, what happens between the moment a caterpillar builds a chrysalid around itself, and the moment it emerges as a butterfly?

The answer was terrifying.*

Apparently a caterpillar does not build a chrysalid at all--it is the chrysalid. It grows the chrysalid beneath its own skin, and then sheds that skin when the time is ripe.

Inside the chrysalid is a folded-up butterfly, getting bigger and stronger, like a flower in a bud, right?

It is a bunch of goo, a glob of jelly, with tiny pre-organs floating around in it.

I'm not sure why I had this reaction, but as soon as I heard that, I got chills. And they kept coming as I listened to the description.

Something about the way this animal grows is so alien to me--the fact that it can be a caterpillar, then a bunch of goo, then a long stick-like animal with wings. I've always loved butterflies, but now I feel a bit afraid of them. They're a bit Lovecraftian now: an alien, insectile, inscrutable being that can seduce and frighten at the same time.

Chine Mieville gets it. His Slake Moths are among the most terrifying fantasy villains I have ever encountered in literature--and all evolved from lovely, harmless, bumbling caterpillars, transformed into gorgeous, shifting, air-borne creatures.

This guy also gets it (terrifying): 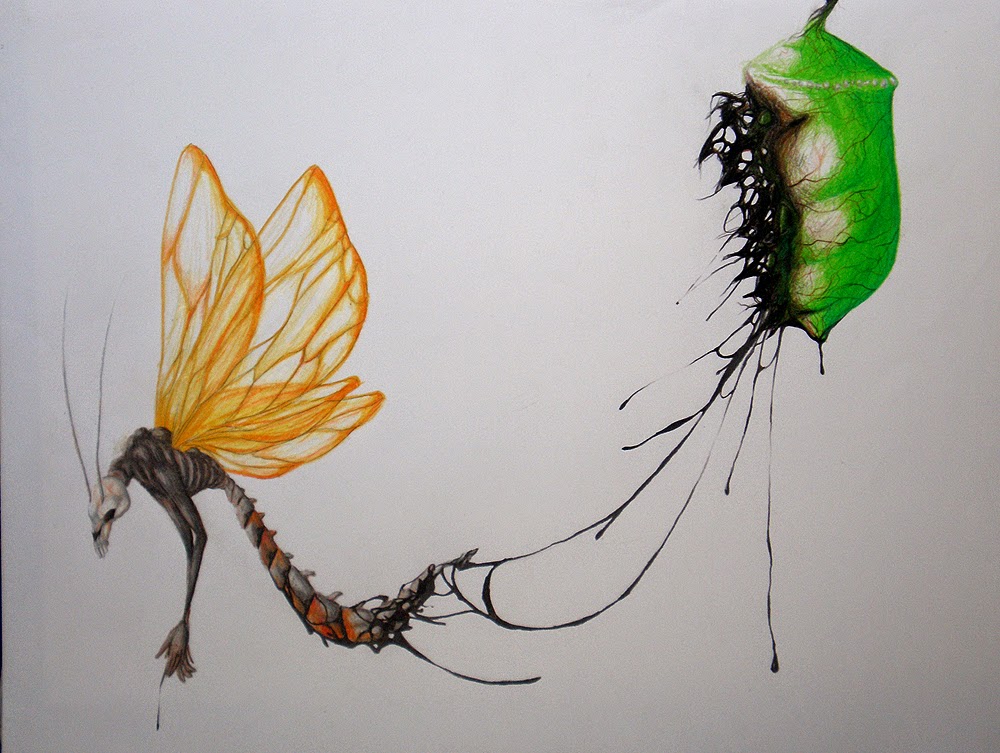 *The Radio Lab segment, called "Goo and You," was excellent. The scientists (lepidopterists FTW) answered the question that occurred to me--how do we actually know that the butterfly and the caterpillar are the same organism, and not just a dead caterpillar goo that grew a butterfly? They established that the goo is the animal, and can actually carry memories from the caterpillar phase to the butterfly phase.
Posted by Kate Lechler at 8:27 PM No comments: