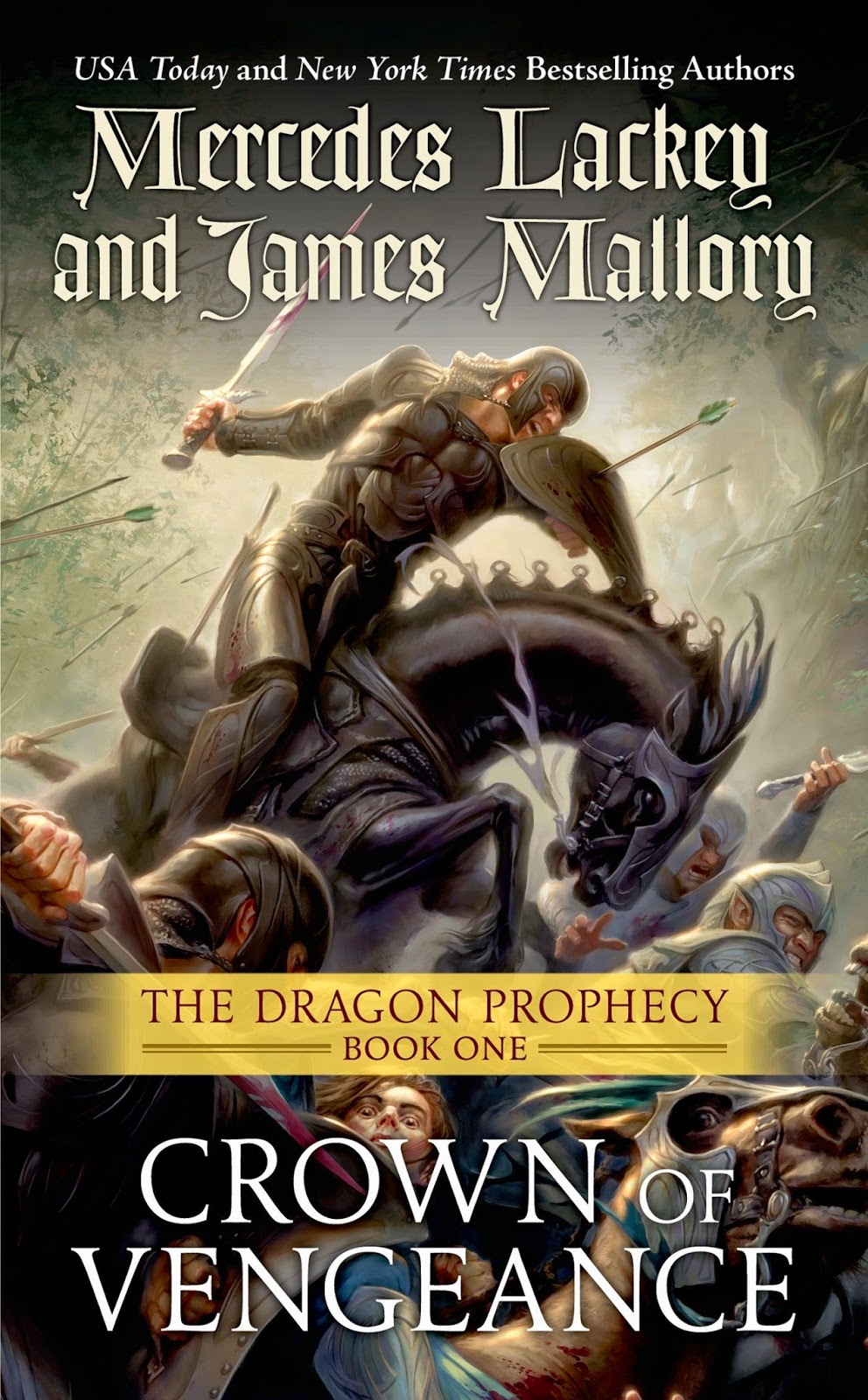 I finished listening to the audio version of Crown of Vengeance, the first in Mercedes Lackey and James Mallory’s DRAGON PROPHECY series. It tells the story of Vielissar Farcarinon, an Elvish mage who discovers when she is twelve that her parents were killed and her ancestral house destroyed by the people who fostered her, House Caerthalion. She nurses her rage and quest for vengeance as she learns to channel the Light. However, she soon finds out that she is the Child of the Prophecy, a foretold hero who will both save the world from the demonic Endarkened and shake Elvish culture and tradition to its very foundation.

Basically, it’s your typical high fantasy. And I am pleased to say that I enjoyed every moment of this book.

Lackey and Mallory’s worldbuilding is pretty fun. The ecology of the world runs on Light, which is the force behind magic. However, there are strictures against using so much Light that the land dies. Instead, there are vast flower forests specifically designated to power the Lightmages’ magic. The history behind Crown of Vengeance is also complex and well-developed, encompassing several millennia that we get glimpses of through stories, legends, and ancient texts referenced in the book. The school where Vielissar and the other mages study reminded me a bit of a co-ed White Tower from Robert Jordan’s WHEEL OF TIME series, headed by an Astromancer instead of an Amyrlin Seat.

However, the names that Lackey and Mallory have come up with for their characters outstrip even J.R.R. Tolkien’s linguistic creations in THE LORD OF THE RINGS for sheer syllable count. This presented a difficulty while listening. I didn’t have a glossary, so it was hard to tell Rithdeliar from Rondithiel. But eventually I just stopped caring who was doing what and let the names wash over me, performed by the pleasant voice of Kate Rudd and the sonorous voice of Christopher Lane. More than once I woke up in the middle of the night with words like “Amrethion” and “Celephriandullias-Tildorangelor” (real name) rolling around in my head.

Crown of Vengeance tells Vielissar’s story, interspersed with interludes following the ultimate villains, the Endarkened. These creatures are the first beings created by He Who Is, who is, I assume, this world’s analog of Jordan’s Shaitan or Tolkien’s Sauron (or Morgoth, if you wanna get technical). These dudes — they are all dudes, at least in the beginning — are enjoyably arrogant and cruel, indulging in lots of high-flown rhetoric and completely unmotivated hatred. They seem like immortal versions of mustache-twirling Dastardly Whiplash, which I was okay with; the melodrama of it all added to my enjoyment. For the Endarkened, the Elves barely register as sapient beings, seeming more like bugs to be crushed. Like your traditional Big Bad, their goal is to bring the world into unchanging darkness. Their target is all of life, everything mutable and organic and imperfect.

On the other hand, the Elves are not even aware, as a culture, of the threat the Endarkened represent. They are too busy fighting amongst themselves, having split into a hundred houses squabbling for centuries over the title of High King. Their society is feudal; the knights of each house fight and die in pointless formalized wars every summer and the peasants feed and serve the nobles. The Song of Amrethion is the prophecy that foretells the danger the Endarkened will pose and Vielissar’s role in fighting them; however, this prophecy has been little heeded and is considered by most Elves to be nothing more than a fairy tale.

When Viel, as she is called, becomes aware of her destiny, one of her first goals becomes to change Elvish society. “No more high houses,” she claims, and she makes good on her promise. Despite being the sole heir of a disgraced and exterminated line, she gathers a vast following by being radically egalitarian, allowing farmers, foresters, knights, and nobles a place in her war council.

Crown of Vengeance holds some good twists, as well, as the authors work to make every element of the story not only relevant but absolutely integral to the plot. Surprise soul-bonding, evil siblings, magical revelations — it’s all here and it all contributes to the epic conflict at the heart of the book: will Viel and her destiny be enough to combat the evil that is coming towards the Elves?

Viel is a bit of a cipher. We are privy to her thoughts and feelings but she doesn’t have a personality as much as a function. However, the authors and even Viel herself are aware of this. At one point, she acknowledges that the Child of the Prophecy wasn’t a person as much as it was a space that she has grown to fill; she looks forward to the day — far in the future — when prophecy will be fulfilled and she can make her own choices.

While I am rooting for that day to come, I do not think there’s much chance of it. Lackey and Mallory have set the stakes so high that it seems unlikely that our heroine will have a truly happy ending, complete with the Elvish equivalent of a white picket fence. Like Rand and Frodo from the aforementioned series, I think the best we can hope for her is that she makes it out alive.

*This review originally appeared at FantasyLiterature.com, where I gave the book 4 stars.
Posted by Kate Lechler at 12:18 PM No comments: