Hamlet, Prince of Denmark: A Novel

This retelling of Hamlet, by David Hewson and A.J. Hartley, is fairly straightforward. It doesn't depart from the basic plot events or thematic issues as we are familiar with them in Shakespeare, nor is it particularly inventive in language or structure. This surprised me at first, as I expected a more meta or avant garde treatment of this most classic of texts. 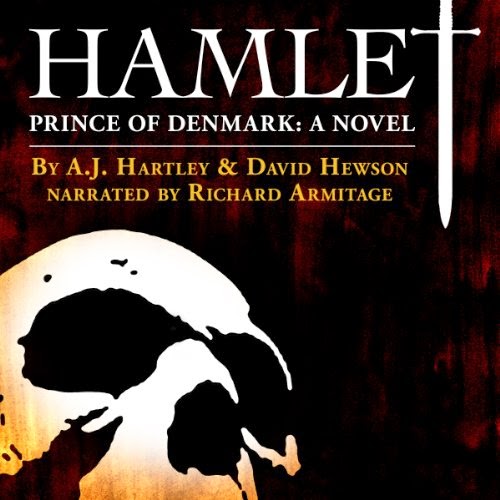 What it does do is deepen the characterization of each of the major characters. In Hewson and Hartley's version, we understand the myriad reasons for Old Hamlet's murder, for Fortinbras' invasion of Denmark, for young Hamlet's halting confusion. We get a lot of backstory, as well--glimpses into the rigid mind of Polonius, the deep love between Claudius and Gertrude, and Hamlet's lonely childhood.

The two places where Hewson and Hartley change the actual plot the most revolve around two relatively minor characters in Shakespeare's play: Voltemand and Yorick, respectively. In their story, the Norwegian ambassador Voltemand takes on a much larger, and more sinister, role, masterminding several of the play's many twists and turns, including Ophelia's "suicide."

Perhaps the largest change is that Yorick is still alive in this play and sticks close to Hamlet, helping him figure out what has already happened and what he should do about it, as well as providing some sharp-tongued comic relief for the beleaguered prince. His existence is explained near the end in what, to me, was a somewhat tired twist (think Fight Club) but his presence during the novel is wonderful, as his dialogue is rife with jokes, puns, and literary references galore.

This Hamlet provides a nice focus on the father/son relationship and the tensions therein, also a major theme of Shakespeare's play. The several father figures in the novel--old Hamlet, Claudius, Polonius, and even Yorick himself--prompt us to ask if the son must take after his father? What duty does a son have toward his father, even if the father does not treat him well? The character backgrounds Hewson and Hartley create make it clear that, if Hamlet had been able to just get over his father's death and forgive Claudius (who had been more like a father to him than Old Hamlet), his life would have been good. He would have experienced love, peace, and fulfillment, possibly marrying Ophelia and taking the crown after Claudius' death. With this understanding, Hamlet's compulsion to avenge a father who never cared for him is even more tragic than in the play.

The theater nerd in me loved that the players were an English theatre troupe composed of actors known to have worked with Shakespeare himself: Richard Burbage, Will Kempe, and the like. They are in Denmark to make some money while the plague is in London, an actual theatrical practice. Well, maybe not as far as Denmark, but theatre companies did travel in the winter and during plague outbreaks. The novel also made much of the language of theater, as does the original play. And Hartley is just the writer to give us this theatrical grounding. He is, after all, a professor of Shakespeare in the theater department at UNC-Charlotte.

I listened to this book read by Richard Armitage (of Hobbit fame) and it was the best reading I've ever heard--great character voices, great accents, great acting!
Posted by Kate Lechler at 3:41 PM No comments:

The Wheel of Time and Women

So, unlike the time when I promised to review every classic Disney movie and then didn't, I'm going to write a series of posts explaining why the Wheel of Time books are simultaneously so good and so bad, addressing issues ranging from characterization and prose style to Jordan's take on race and gender issues.

Today's post is about women in the Wheel of Time.

Women are crucial to the series, as individuals and in groups. One of the most compelling inventions of epic fantasy is the White Tower of the Aes Sedai, which blends all of the raw magical and political power of the Bene Gesserit with the wide-eyed wonderment and growing pains of Harry, Ron, and Hermione as they train at Hogwarts. The Aes Sedai are a group of women who have received training in channeling, which means manipulating elemental forces to alter the world. Because of these powers, they are feared and/or revered across the world. Their headquarters and training ground, the White Tower, has three and a half thousand years of history behind it, and several important prophecies mention its role in the coming apocalypse, the Last Battle.

Basically, it's a huge all-girls' school-slash-abbey for training in magic and world domination. Which. Sounds. Incredible.*

Jordan has spent a lot of time fleshing out the Aes Sedai and the White Tower, giving them rules that both make sense and contribute to the plot, nuanced political factions within the tower, a diverse reputation across the various lands, and lots of cool gadgets. Their history is just as important a part of the Wheel of Time as the history of Rand al'Thor himself (the legendary savior called the Dragon Reborn) and the end of the series makes it clear that they will continue to guide the world even after the Last Battle. They are so central that you could rewrite the entire series just from the p.o.v. of the White Tower and its members, and not really lose a lot of plot. (IMO, that would be a better series, but I'll talk more about that as we go.)

The Aes Sedai are just the most prominent group of women influencing events in the Wheel of Time. They are joined by the equally impressive, charismatic Aiel Wise Ones, the Kin, and the Windfinders and Wavemistresses of the Atha'an Miere.

Individual women in the Wheel of Time are also strong, brave, powerful, and important. I'm hard-pressed to think of any of the major female characters who only serves as a prop for a male character; they all have complicated inner lives and motivations.*

My favorite (everyone's favorite?) is Egwene al'Vere, who is basically the BAMFiest BAMF of all time. She's accomplished and talented. She faces danger when she teaches herself how to dreamwalk, works hard when she trains as an an Aiel Wise Woman while she's training for the White Tower, and puts up with no shit from anyone when she becomes the youngest Amyrlin Seat ever. She also has great inner strength, a reserve which she draws upon and intentionally deepens whenever she encounters difficulty, such as being manipulated by older counsellors in the Hall of the Tower, being captured by enemy forces, or tortured by rival Aes Sedai.

But Egwene is not just a bad-ass woman, with the hardness and emotional emptiness that often accompanies that stereotype. Jordan lets us see her insecurities, her vulnerability, her growing sense of purpose and calling, as she struggles between her personal relationships and her duty as Amyrlin Seat.

So . . . all of that sounds great, you say. Where does Jordan go wrong?

While his women are awesome, strong, fully-realized characters, he also plays on the most overused, banal gender stereotypes imaginable to create them. For instance, the idea that women are super dramatic, emotional vomit machines.

A great example of this are the Aes Sedai. One of the hallmarks of this group is that they have great emotional control. Their faces are smooth and give nothing away, an affect which is very intimidating for any Muggle-types treating with them. We are told this fact about them many times. So, that's how they are in action, right?

Oh yeah, EXCEPT for literally ANY TIME they are "on screen," when Jordan can't wait to tell you how much drama was going on and how shocking it was to see the famed unreadable Aes Sedai displaying emotions by any number of verbal or physical tics such as: gasping, crying, staring daggers, making a face, yelling, snarling, cursing, smoothing a skirt, twisting a skirt, bunching up your fists in a skirt (lots of skirt-related drama), etc. Even the WoT Wiki recognizes this, as it defines women as: "People who sniff, stare, smooth their skirts, and fold their arms under their breasts, and other stuff also, but mostly that."

Nynaeve's ever-loving braid pulling is the most extreme example of the emotional-vagina syndrome in the Wheel of Time. Nynaeve is already supposed to be a pretty high-strung person, ("even for a woman," I hear Jordan saying from Epic Fantasy Heaven right now) but whenever she gets mad, she pulls and tugs at her braid. There are approximately 407 references to her pulling her braid in the entire series; she is mad almost all the time. Cause, women, right?

The other fun gender stereotype that Jordan draws on is the somewhat muzzy idea of "femininity."

This comes out in the way women control their half of the Source, the force that keeps the world turning and allows them to manipulate the elements. Because men can channel, too, in the Wheel of Time. Early in the series, they don't channel as much as women (we'll get to why next time) but they can access the Source. And when they access it, they fight it, like a raging fire. It almost consumes them, and they battle it for dominance every time they tap into its power.

But women . . . no, women don't get power by fighting, strength, or brute force, no sirree. That would be unfeminine. Women flow. For women, channeling involves flowing with the Source as if it's a river. It involves imagining themselves as a flower opening to the sun. Primarily, it involves surrender. Geez, who wrote this, Robin Thicke?

I can't even get into all the ick I feel about those images being connected to the idea of a woman's power. If I try, I just sound like a freshman whose mind has just been blown by their first women's studies course. Suffice it to say, the connotation of women as a delicate flower and the necessity of surrender ("In magic as in love, grasshopper") is overplayed and pretty cheesy here.

What's the takeaway? For me, it's this. Jordan's series tries real hard to be feminist. You don't create a world in which women control most of the magic for centuries, in which half of the nations we encounter are ruled by women, and in which the central organization for both magic and politics is run entirely by women, and not have some kind of feminist message. And, in some respects, it succeeds beautifully. If I ever write fan fiction, it's gonna be White Tower fan fiction. But the strength of Jordan's message and his storytelling was undercut by his own gender biases, as will be even more clear when I talk next about masculinity and the Wheel of Time.

*It's like the concent from Neal Stephenson's Anathem, except just with women! Aghghghgh!

*I dunno, except maybe for Min? I feel bad saying it, because I like her a LOT more than I like some of the other aggressively "sassy" lady-type characters, but she may just be a prop for Rand. Dang.
Posted by Kate Lechler at 1:02 AM 1 comment: