Evolution of a Sci-Fi Class 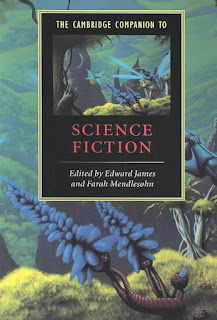 A few years ago, I was approached by an academic publisher to review a proposal for a sci-fi textbook. I was excited to do it, but a little confused as well; I’d only taught a class on speculative fiction* twice, and was not an expert in the field by any means. But the publisher had found my name and course descriptions online, and if that was good enough for them, hey, why not?

When I opened the proposal, I was surprised by how limited the anthology was, despite including 50 stories. The proposal was focused on including “classic” stories—in the words of the author, “the greatest science fiction stories ever written." I had already expected it to be weighted towards the Golden Age of sci-fi--most anthologies I've seen are--but I wasn’t prepared for how heavily weighted it would be. Although the timeline of the anthology began in 1844 and went through 2011, fully half of those 50 stories were from just three decades—the 40’s, 50’s, and 60’s. And although I could tell that the author had made an attempt to include women and writers of color, I was still disappointed by the scope of science fiction represented in the anthology. In short, it didn’t seem to be doing anything different from any number of anthologies already out there.

Maybe I’m not as interested in the “classic” label as others are. What’s exciting for me about reading contemporary speculative fiction is how different it is from what I grew up expecting when I read an SFF story. Read most of the pro SFF magazines today and you’ll find a wide variety of storytelling modes, of prose styles, and of points of view.  I don’t mind social issues in my fiction. Yep, I’m one of those people. To my mind, speculative fiction is one of the most fun and most subversive ways to tip the [insert ideology here] status quo on its head and explore alternatives to the norm.

Fast-forward five years, and I’m teaching another speculative fiction class. In the interim, I’ve learned a lot more about the field by reviewing books, reading spec-fic magazines regularly, and writing SFF myself. I’m still not an expert, but this time around, I decided to challenge myself by building my own syllabus of stories instead of relying on an anthology. (You can view it here.)

The first question I asked myself was: okay, so what IS speculative fiction? Am I going to try to cover fantasy, sci-fi, horror, and magical realism in just one class? Or am I going to specialize?

Spoiler alert: I decided to specialize.

Now, my very specific jams are dark, lush fairy-tale retellings, but I’ve taught that class, and I wanted to do something new. I was also considering the bald economics of teaching at a university: keeping butts in seats, so to speak. I thought I had a better chance at attracting students with sci-fi than I did with a course titled “Kate’s Favorite Dark Fairytales," (subtitle: everybody bring a pillow to scream into).

I also wanted to keep cost in mind. The two sci-fi textbooks I’ve used in the past are both pretty expensive, upwards of $50 a pop. Instead, I began by choosing a book of criticism that would function as an introduction to the field: The Cambridge Companion to Science Fiction, pictured above. It’s a reasonably priced textbook with essays covering the chronology of SF, as well as major thematic issues and critical approaches to SF. The bulk of the rest of the reading I found available for free online.

Using some of the issues and themes that the Companion develops, I structured my class into 4 units. During the “Explorations in Space and Time” unit, we look at time-travel and space-opera. In the “Strange Encounters of the Third Kind” unit, we read some first-contact stories, and then examine the ways sci-fi has treated issues of race and gender. We discuss governments and political systems in our “Utopias and Dystopias” unit. And then end with a unit on ‘The Post-Human,” in which we cover artificial intelligence, human evolution, and the blending of biology with technology. The larger question we consider, through the lens of each of these units, is a question that a lot of literature asks: “What does it mean to be human?”

Because I’m teaching an undergraduate class, I felt like I couldn’t dispense entirely with the SF classics. That’s probably what the students have come to read, anyways: the Robert Heinleins and Arthur C. Clarkes of the world. But I wanted to balance the expected sci-fi stories with more modern stories to give the students a taste of what the field actually looks like today. Representation mattered, too; I consciously sought out writers of various backgrounds and identities. So for each unit, I chose a couple of the old standards, and then a handful of stories that fit the theme from recent issues of major spec-fic magazines. This way, I got to introduce my students to amazing authors that they may not have heard of like Charlie Jane Anders, Benjanun Sriduangkaew, Rachel Swirsky, Nnedi Okorafur, Ken Liu, and Kelly Link (and some online comics from my fave, Emily Carroll! *squee*)

I was terrified to do this when I started. I felt like I didn’t know enough about the field (it’s YUUUUUGE) and, even with what was available for free online, I was spoiled for choice. But I'm pretty happy with what I came up with; it helps that the students seem to be digging the choices I’ve made. However, as I’ve said repeatedly in this post, I AM NOT AN EXPERT, so I welcome feedback and story suggestions as I tweak this class for future iterations.

*by which I mean sci-fi, fantasy, horror, and magical realism ... and all the subgenres thereof.
Posted by Kate Lechler at 5:10 PM